We have added many new features and settings to make it easier to manage Apple TV devices in DuoSTATION MDM.

Now it’s possible to install/uninstall apps in the same way as for iPhone/iPad. Either by using ‘App installation’ configurations or by using the commands ‘Deploy apps’/’Undeploy apps’ in the view ‘Devices’. To install an app from Appstore, a VPP license is required.

You search for and add apps for tvOS in the same way as for iOS and macOS. One thing is different though. Apple publishes apps for both iOS and tvOS together in Appstore. That means that some tvOS apps are presented in the same row as the iOS version of the app. The new column ‘Apple TV’ in the view ‘Apps’ indicates if the app can be used on an Apple TV or not. Apps that only can be run on tvOS, is presented in a separate row with the symbol for tvOS.

It’s possible to use the ‘Single app mode’ configuration with Apple TV, so only specified app can be run.

‘App blocking’ configurations can also be used for Apple TV in the same way as iPhone/iPad.

System updates can be managed for Apple TV in the same way as iOS devices.

It’s also possible to set restrictions on Apple TVs. As always we indicate which restrictions can be used for each platform: 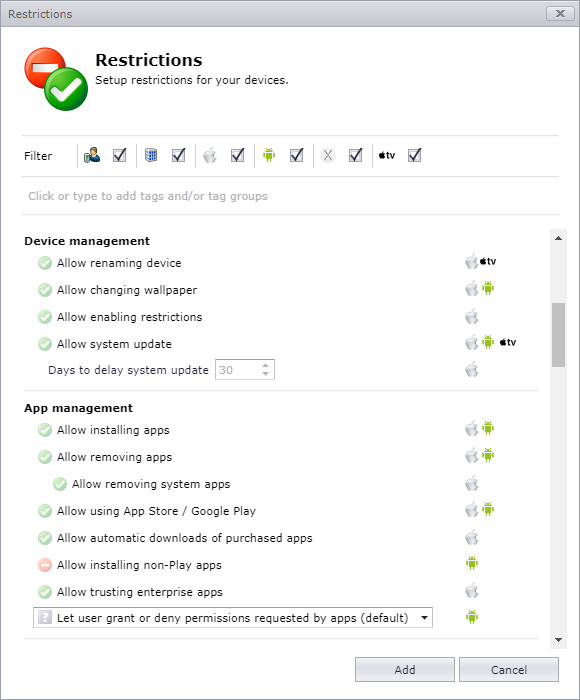 To factory reset an Apple TV, select the device in the view ‘Devices’ and then use ‘Actions>Commands>Wipe selected devices…’.

We have made some optimizations specifically to speed up loading views when navigating in the group tree.

Importing users from ActiveDirectory / eDirectory is managed by using DuoSTATION. Now we have improved that feature so it’s possible to make a more granular filter of which users to import. Contact us and we’ll help you out. 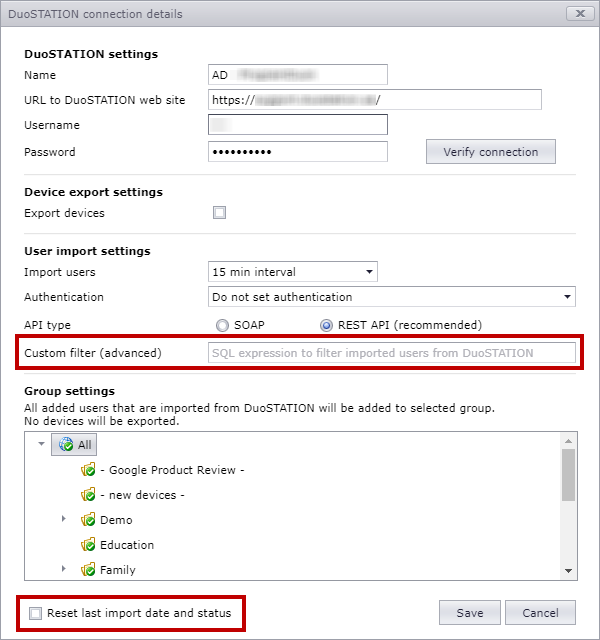 Each time only updated users from last import are imported. Sometimes you need to reset the timestamp from the last import, so all matching users are imported. This is now easily done by using the new checkbox.