The app for older Samsung devices

The app for Samsung devices which run Android before version 4.2 has been unpublished from Google Play and must now be downloaded from the MDM system instead. This is because new requirements from Google which forced us to change the app. And Samsung has stopped supporting the older technique this app uses. So we can’t make a new version to publish on Play. This does not affect Samsung devices running Android 4.2 or later.

In the tab ‘Configurations’ in ‘Device details’ it’s now possible to remove configurations. At the next inventory these will be reinstalled again. 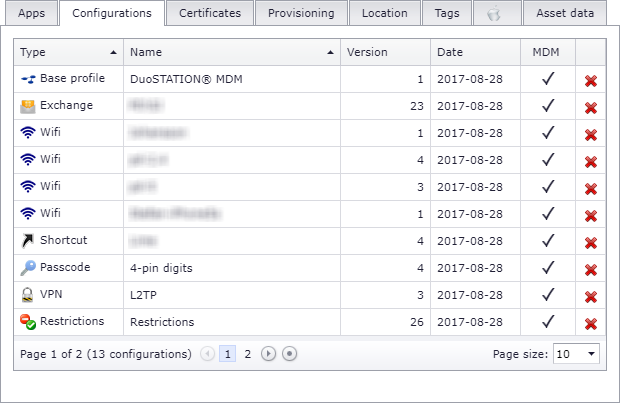 We have fixed the problem when updated Exchange-configurations weren’t installed when changing a user account name or email address.

All web browsers have today features to automatically fill values (including passwords) in forms. Settings sent out from servers that the web browser should disable this features are ignored. These features has been causing problems by automatically fill in account name and password when adding or changing a user in DuoSTATION MDM. By mistake it was possible to create 2 users with the same account name, which caused problems when logging in to the system. In this version this is fixed.

Commands that gets delayed

Users have experienced that it sometimes takes hours before commands are executed on devices. We found a bug that caused this and have fixed it.

It’s no longer possible to delete a user that has linked devices. These devices must be linked to another user before deleting the user.

We have added more requests in the API that can be used to send and get data to/from the system. Contact us if you want more information about this API.